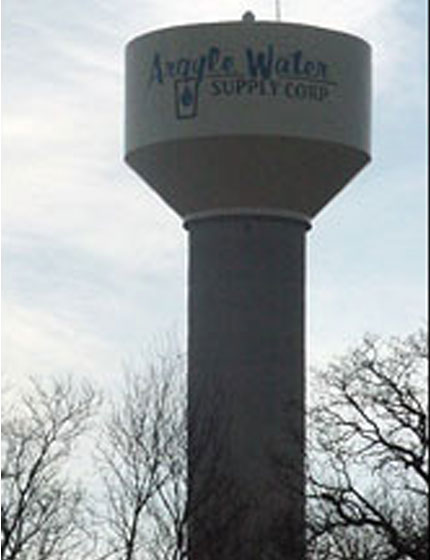 During the 1950’s, much of the southwest U.S. including north central Texas experienced drought that began in 1950 and finally ended in 1957. During that period of very low rainfall, many of the communities experienced problems with water supply. Many rural areas that had depended on wells and small surface impoundments ran out of water. Hauling water became the norm for a large number of rural families. Many of the old wells that had provided a dependable supply of water for many years had dried up or had become unsafe to drink. North central Texas and the Argyle area also began to see the population increase, so further pressure was placed on the existing water supplies.

During this time, many residents of the Argyle area were voicing their concern about the lack of a safe and dependable supply of water for their community. Several area leaders began to search for a solution. After much effort, it was decided that since their were no existing municipal governments in place at the time, that the most desirable solution was to form a Rural Water Supply Corporation. These Corporations were made possible due to technical support and funding through long-term low-interest loans made through the United States Department of Agriculture. They were incorporated as member-owned non-profit utilities. Their operating revenue was provided from the sale of water and they had no authority to collect taxes from the citizens. AWSC continues to operate in that way today.

These local leaders enlisted the aid of a consulting engineer and with their expert guidance and with help from the staff from the regional office of the U.S.D.A. Farmers Home Administration, design of the initial production and distribution facilities was begun. Many of these community leaders visited with their neighbors and encouraged them to sign up as Members of the new utility. That first year, seventy-five residents had signed up and agreed to become customers. That first group began to receive water service in 1963. 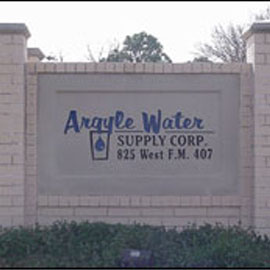 The rest, as they say, is history. Today, AWSC serves over 2700 connections providing water service to the Town of Argyle, the City of Corral City, portions of the City of Denton, the Town of Bartonville, and a large area of unincorporated Denton County. Water supply is provided from AWSC’s own well field, and we also purchase treated surface water from Upper Trinity.

In 1995, The Texas Natural Resources Conservation Commission recognized AWSC as a “Superior Public Water System”. This designation is awarded to water utilities that demonstrate not only compliance with all Federal and State regulations, but have met additional requirements beyond the minimum and have shown that they are committed to excellence in all areas of their operation. AWSC is very proud of this distinction. The Board of Directors and the staff are dedicated to providing a high level of service and performance for its customers that will allow it to continue to deserve being recognized as one of the best water utilities in Texas.